King Jadwiga rules Poland in Sid Meier's Civilization® VI! Religious and expansionist, Poland can gain control of other civ's tiles when they fortify their borders, and Jadwiga makes Relics more valuable and Holy Sites more effective. A new scenario is also included: stand at the crossroads of Europe protecting the fertile Polish homelands from those who would seize it to empower themselves. Can you stand as a bulwark against this threat?

- Poland’s “Golden Liberty” unique ability allows them to gain territory when they build a Fort or Encampment, even allowing them to steal territory from other civs! They also convert a Military Policy slot into a Wildcard slot, giving them extra flexibility in culture.

- Jadwiga allows you to spread your religion to the nearby city when you gain another civ’s territory with Golden Liberty. Her relics provide bonus Faith, Culture, and Gold.

- The famous Winged Hussar is strong on the attack and can push back defending units.

• Play as a great Polish noble lord in the “Jadwiga's Legacy” Scenario:

- Defend Poland, Prague, and Vienna from invaders including the Teutonic Knights and Ottoman Turks.

- Gain glory in battle and prove yourself the greatest defender of Poland. 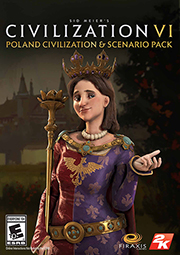